Following the Englishman’s departure after only six months in Munich, Bayern announced 62-year-old Hermann Gerland as Clement’s successor on Tuesday, while the Italian’s son, Davide, is set to embark upon a more tactically challenging role with the Bundesliga champions.

“Hermann Gerland and Davide are sufficient co-trainers,” Ancelotti said. “Both of them will take over Paul’s tasks.” 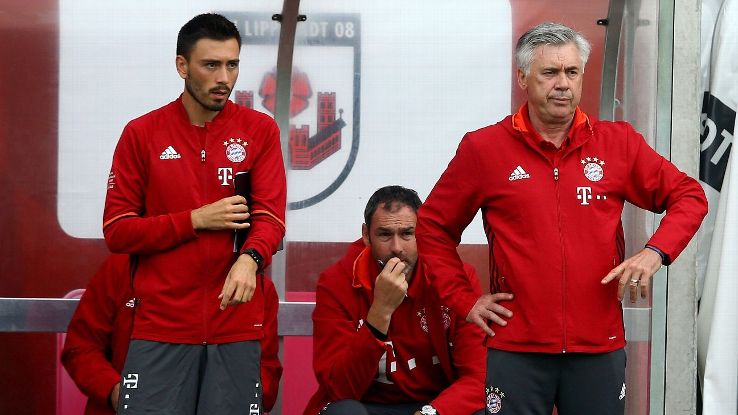 Ancelotti’s 27-year-old son is a former AC Milan youth player and served as a fitness trainer under his father’s tutelage at both Real Madrid and Paris Saint-Germain.

But Ancelotti senior holds no reservations about his son’s aptitude for the new challenge ahead.

“Davide will have no problem in assuming more responsibility,” he added. “He’s capable and possesses the tactical knowledge that we need.

“He gets on well with Hermann. They’ll both get on with things and successfully replace Paul. I’m not at all worried.”

Meanwhile, Ancelotti believed the Swansea job represented “a good opportunity” for Clement who leaves Bayern in an attempt to keep the struggling Welsh side in the Premier League.

And Clement bid his farewell to Bayern via the club website, also thanking CEO Karl-Heinz Rummenigge and Ancelotti for allowing him “the chance to fulfil my desire of becoming a head coach,” — a position he held until his dismissal at Championship club Derby County in February 2016.

Following 329 games as Ancelotti’s No. 2 spanning almost seven years, Clement said: “It was a joy to work alongside him.”

He added: “I wish everyone at Bayern great success for the second half of the season. I am now a Bayern Munich fan!”

Clement’s new side enjoyed a dream start with the Englishman on the touchline — beating fellow Premier League strugglers Crystal Palace 2-1 on Tuesday.