Barcelona sporting director Robert Fernandez confirmed Claudio Bravo will feature in Saturday’s La Liga opener against Real Betis, but conceded he may not remain at the club beyond the current transfer window.

However, while Robert didn’t rule out a transfer, he did say that the Chilean goalkeeper will not move to the Premier League before the weekend.

“A lot has been said but I can only say that Claudio Bravo will be with us on Saturday,” Fernandez told TV3. 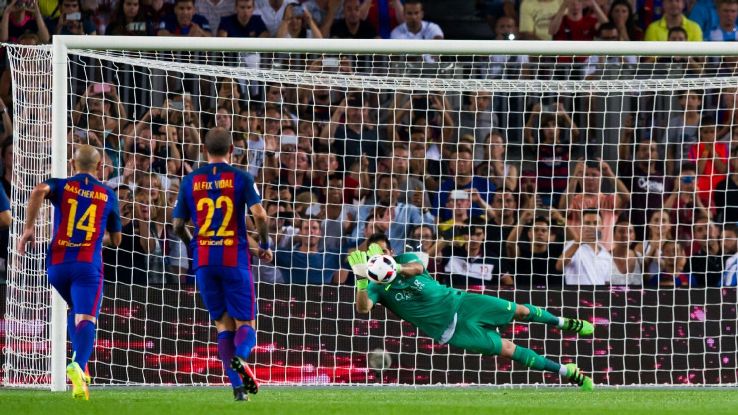 “After that, we will see. If in the end Bravo goes, another goalkeeper will have to come in first.”The deal has been held up due to an injury to Marc-Andre ter Stegen.

Barca are also hoping to sign Brazilian Diego Alves as Bravo’s replacement and Valencia have indicated the goalkeeper is free to leave the club.

Pressed on the Bravo situation and asked when Ter Stegen will be fit to return to action, Barcelona manager Luis Enrique gave nothing way after his side’s victory against Sevilla.

He told a news conference: “The medical team will say when Marc [is available again]. Nobody knows, still.”

With Bravo in goal, the Catalan’s 5-0 aggregate win over Jorge Sampaoli’s men earned Luis Enrique his eighth trophy out of a possible 10 during his time at the Camp Nou.

The Barca coach deflected the spotlight for that success onto his players, before questioning the need for a Super Cup when one team wins La Liga and the Copa del Rey, as the Blaugrana did last season.

“I am very fortunate to have a group of unique players who don’t stop surprising me,” Luis Enrique said.

“They are [all] different and the good thing is that the new players have a lot of enthusiasm and will try and copy what those who have been here for years have been doing. It’s a true honour and a pleasure.”

team wins the league and the cup it makes no sense to play it. And I say that now that we’ve won.”Sevilla president Pepe Castro earlier said that the current two-legged format should be scrapped in favour of a one-off game.

As for the build up of games the Super Cup brings, he added: “When the same

team wins the league and the cup it makes no sense to play it. And I say that now that we’ve won.”

Sevilla president Pepe Castro earlier said that the current two-legged format should be scrapped in favour of a one-off game.