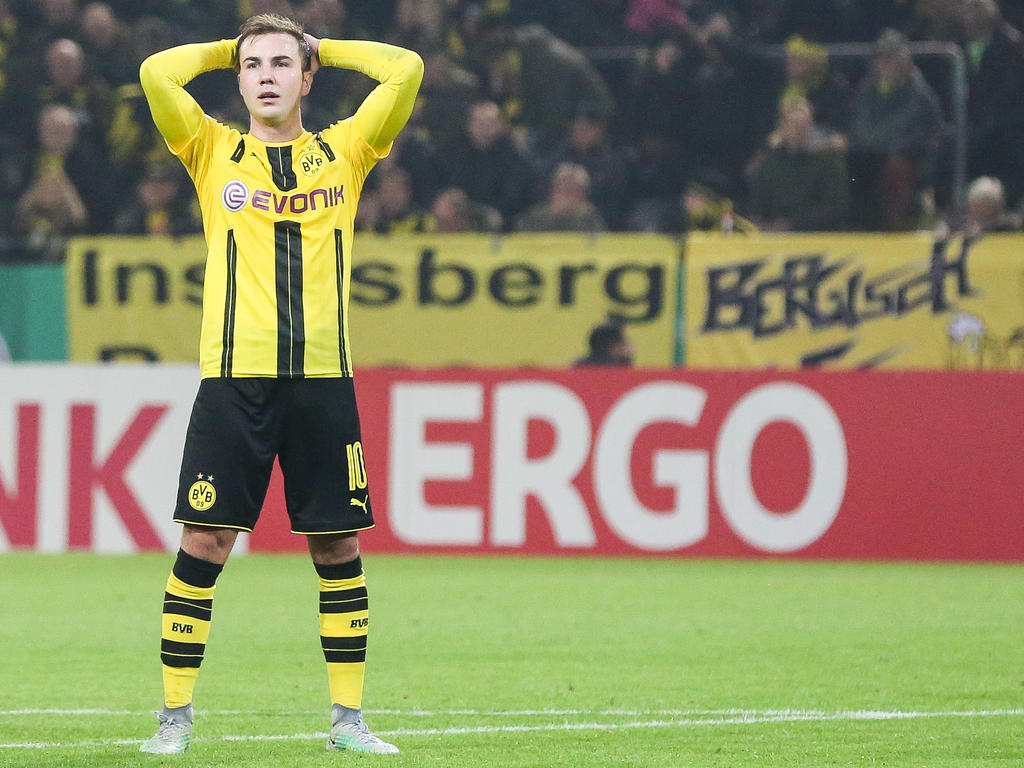 Mario Goetze had the nation at his feet when Germany’s hero netted the winning goal in the 2014 World Cup final.

Fast-forward nearly three years and Monday’s news that the Borussia Dortmund star is sidelined indefinitely by a metabolism disorder is the latest blow to affect the attacking midfielder since the Brazil triumph.

Among the Dortmund games he will miss is the Champions League round-of-16, second-leg clash at home to Benfica on March 8, having lost the first match 1-0 in Portugal.

“I am in the process of getting treatment and I will do everything I can to get back into training as quickly as possible,” Goetze told the club website on Monday.

But there has been an air of frustration around the 24-year-old for weeks.

Goetze has scored just two goals in 16 appearances for Dortmund in all competitions after returning to his hometown club for this season.

It has been a poor return on the 22 million euros ($23m) it cost to buy him back from Bayern, who forced Dortmund to sell him for 37 million euros in 2013 when the Bavarians triggered a release clause in his contract.

Goetze failed to hold down a first-team place at star-studded Bayern in three seasons under Pep Guardiola, who preferred the silky skills of Thiago Alcantara to Goetze’s industry around the edge of the box.

A telephone call with Guardiola’s replacement Carlo Ancelotti towards the end of last season was enough to convince Goetze his future lay in Dortmund, but his return has not been a happy one.

He has featured in only 11 Bundesliga matches this season, played the full 90 minutes just four times and spent six games entirely on the bench.

Goetze has not played at all this month after picking up a leg injury.

Dortmund coach Thomas Tuchel dropped him for Dortmund’s home Bundesliga win over second-placed RB Leipzig at the start of February because of poor form.

There has been external criticism, most noticeably from Lothar Matthaeus, who captained Germany to the Italy 1990 title.

The 55-year-old believes Goetze is running out of options and needs to adapt.

“Quite honestly, even if it sounds a little nasty, if he does not sort it out at Dortmund, he has to go to China, because he certainly won’t want to make less money,” Matthaeus told magazine Sport Bild last week.

“He can’t go to (Dortmund’s arch rivals) Schalke, he wouldn’t fit at Bayer Leverkusen and Borussia Moenchengladbach can’t afford him.

“Top clubs from abroad no longer have him on their list.

“He has to change, that is clear.

“He doesn’t have the speed, which is everything in football today.

Dortmund, who are third in Germany’s top flight, have given no date for his return and are protective of Goetze, who came up through the junior ranks.

“I am quite certain that some people still have to apologise to Goetze. Even if they are a big name,” said Dortmund’s CEO Hans-Joachim Watzke in relation to Matthaeus’ comments.

There is some relief around the club that there is a medical reason to explain the Germany star’s loss of form.

“We are glad to know the reasons for Mario’s complaints and we are convinced that after recovering he will give us extra quality with his exceptional abilities,” said Dortmund’s director of sports Michael Zorc.

“Mario gets the full backing and maximum support from all of us at Borussia Dortmund on his way back.”

But Goetze is a long way from his dazzling form in 2011 and 2012 when he helped Dortmund win the German league titles at Bayern’s expense.

In a Dortmund midfield boasting talent like Germany’s Marco Reus, teenager Ousmane Dembele and Raphael Guerreiro, who Tuchel has heaped praise on, Goetze faces an uphill battle to once again hold down a first-team place.

October 19, 2017
Former Manchester United midfielder Paul Scholes admitted he wanted the role as League One Oldham boss and still harbours hopes it may happen in the future "I wanted the...

Arsenal boss Wenger: I need to talk to Alexis about Chile...