After each round of Premier League fixtures, ESPN FC brings you its Team of the Weekend. Our panel of experts carefully selects 11 star performers, along with a manager.

Do you agree or disagree? You can have your say on those picked or overlooked in the comments section at the foot of the article or on Twitter using the hashtag #TOTW. Plus, tune in to Monday’s ESPN FC show (5:30 p.m. ET, ESPN2) for further reaction.

Goalkeeper: Manchester United managed 37 shots against Burnley, including 11 on target, but failed to score. And as much as Jose Mourinho’s side were guilty of wastefulness, Tom Heaton was magnificent for the Clarets as they claimed a first away point of the campaign. He is duly selected by our panel, with Paul Mariner labelling him “outstanding” and crediting him for making “probably the save of the year” from Zlatan Ibrahimovic.

Right-back: It turns out you don’t always have to spend millions bringing in new signings, sometimes you can work with what you already have. That is something Chelsea boss Antonio Conte has done to great effect with Victor Moses, who has been a sensation in recent weeks and has the look of becoming a regular. Gabriele Marcotti rightly praises his efforts in the 2-0 win against Southampton, saying: “He set up a goal, shut down the wing and ran himself into the ground. What more could Conte want?” Quite.

Centre-back: Burnley’s gargantuan defensive effort against United wasn’t down to Heaton alone. Michael Keane proved a point against his former employers with a brilliant display and as such is selected by Marcotti, who says: “Burnley defended in numbers, but he was the general who ensured every gap was plugged,” Mariner, talks up the 23-year-old’s “positional play, organisation and attacking of the ball.”

Centre-back: Ben Mee of Burnley is a contender, with Mariner rightly saying: “He repelled everything that United threw at them,” but the part Joel Matiphas played in easing Liverpool’s defensive frailties since a free transfer from Schalke in the summer deserves noting too. He may only be 25 but he has been a steadying influence, a point that isn’t lost on Marcotti, who said: “He has been Liverpool’s best defender this year and in the 4-2 win against Crystal Palace he also popped up with a key goal.”

Left-back: Arsenal’s strength in depth could really make a difference in the title race this season, as Kieran Gibbs showed when he came into the side for his first Premier League start of the season. It was only against Sunderland but as Mariner points out, he did a “fantastic job as an attacking wide option and defended when he had to”. He also grabbed an assist in the Gunners’ 4-1 win to edge ahead of Marcotti’s pick, Liverpool’s Alberto Moreno.

Midfield: Ross Barkley played a big role as Everton ended a run of five games without a win, beating West Ham United 2-0 at Goodison Park. An excellent save by Adrian denied him a goal in the first half but he got on the score sheet later in the game and caught the eye of Marcotti, who notes: “Games likes these will get him back in the England team. Maturity, strength and quality.”

Midfield: Ilkay Gundogan arrived in the Premier League with a big reputation and after recovering from injury, he looks to be finding form at Manchester City. The Germany international scored two goals and a provided an assist in an excellent all-round display as West Bromwich Albion were dispatched 4-0, making him a certain pick. “This is why he’s here,” says Marcotti. “Class,” adds Mariner. 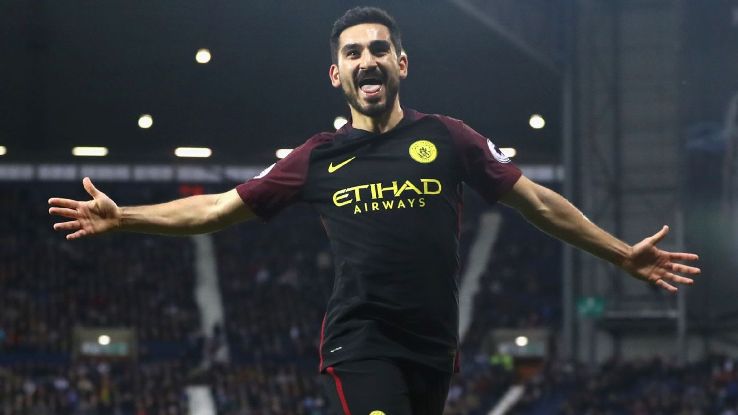 Midfield: Liverpool are the joint-top goal scorers in the Premier League this season, with the form of Philippe Coutinho central to their threat in the final third. Crystal Palace found that out the hard way on Saturday, the Brazilian chipping in with two assists as the Reds strolled to a 4-2 win at Selhurst Park. Mariner said: “He was unplayable at the heart of a sparkling Liverpool performance.”

Attack: Any doubts about Sergio Aguero‘s future at Manchester City should be forgotten after a dominant display at the Hawthorns which saw the Argentine bag a brace of the highest quality to prove, as Marcotti succinctly puts it, “who the best finisher in the Premier League is.” Not to be outdone, Mariner adds: “He will be the difference in the title race if he can stay fit.”

Attack: Diego Costa is another player proving the doubters wrong. The Chelsea man now has eight goals and two assists in 10 Premier League games this season and his strike in the 2-0 victory at Southampton was his 40th Premier League goal on his 64th appearance. That’s enough for him to make the cut in this team, with Marcotti is suitably impressed, saying: “Nice goal, but above all Costa showed he can lead the line on his own and be unselfish too.”

Attack: Alexis Sanchez added two more goals to his tally as Arsenal continued their title charge, making him a unanimous pick. Mariner argues: “Sanchez must play the No. 9 role for Arsenal — his movement and pace in behind defences and goal threat is key,” while Marcotti liked his ability to “stomp all over Sunderland and help out Giroud, too, once he came on.”

Manager: Marcotti makes an argument for Sean Dyche to lead the Team of the Weekend, “for essentially parking the entire Burnley Metropolitan Transit Authority,” let alone the bus, against Manchester United, but after ending Manchester City’s six-game winless run, Pep Guardiola gets the nod, with Mariner stating: “Pep must have been feeling the pressure, but his team responded well with an emphatic win.”