Jurgen Klopp believes only hard work will ensure Liverpool a successful season and urged the need to focus on themselves and not their rivals.

Liverpool can go joint-top alongside Manchester City and Arsenal if they beat Manchester United at Anfield on Monday following an excellent start to the campaign that has seen them win five of their seven fixtures, but the German knows there is still a long way to go.

“It is really good to hear about nice things, but we must remember that football is not the most serious thing in the world,” Klopp said.

“Of course, as human beings we all have our expectations, and at this moment there is still a positive atmosphere in and around Liverpool.

“That is good. But it doesn’t mean the season is finished when we get another three points. We wont say ‘stop, as we are in the position we want to be.’ To keep this good situation we need to work.

“I don’t care what people do around me. A lot of good teams are around and the good times will not just come back just because we wish them.”It is positive that we had all these great personalities, coaches and players in the past. But it doesn’t help us now.” 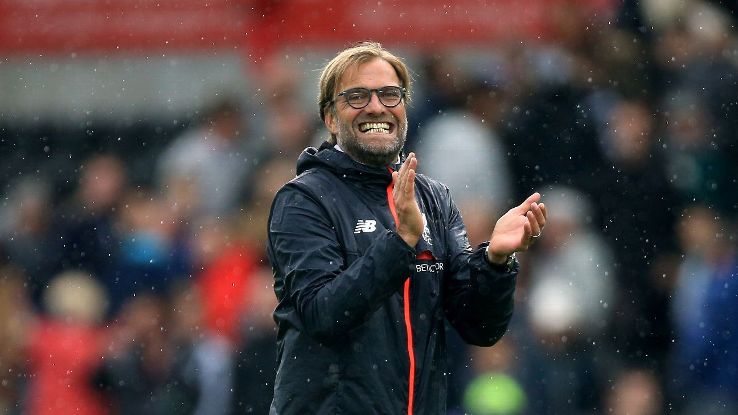 Klopp also shrugged off the idea that United’s spending power had given them an advantage over Liverpool.

“I don’t care about how much money another club can spend,” he said. “I don’t think about it for one second of my life. Absolutely not. Having more money, or all the money in the world is not in my dreams for the manager’s job.

Liverpool go into the game against their north-west rivals on the back of four wins, while United have only won once in that time, but that doesn’t give them an advantage.

“Going into this game against Manchester United everyone seems to have the feeling that we are in a good way and they are not in a good way, but if you look at the league table there is only a three-point difference,” Klopp said.

“That’s absolutely nothing. We don’t feel we are in a good way and they are not, we only think about their quality, and they have big quality. If you have one second where you don’t concentrate, you can lose the game in that second. That’s how it is. There’s not a big difference between the teams.”