The Brazilian has been thriving in Liverpool’s front three alongside Sadio Mane and Roberto Firmino this season, scoring four goals and creating the same amount.

And Lovren told reporters: “In my opinion, he’s the best player in the league at the moment.

“He wasn’t just outstanding against Palace — he’s been like that all year. His crosses were perfect. We scored from his set pieces.

“He is a main part of the team, but it’s not an individual thing that wins us points, it’s teamwork.

“But of course when a team works really well, individual qualities come out. I think that man against Palace was Philippe Coutinho.” 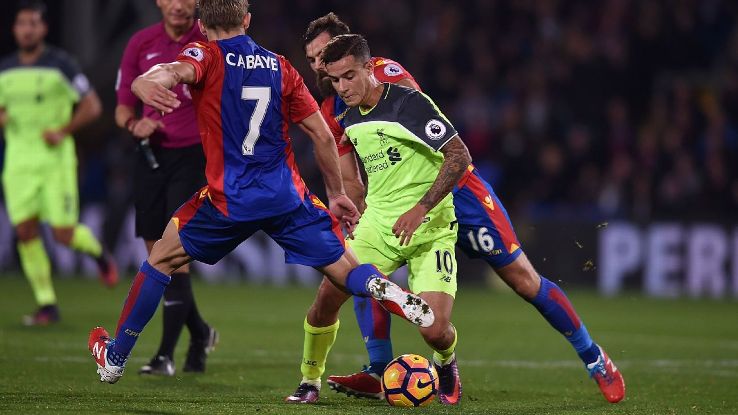 Meanwhile, Lovren said he had wanted to jump into the crowd after scoring to atone for the error that had enabled Palace to make it 1-1.

The centre-half underhit a backpass to goalkeeper Loris Karius, with James McArthur capitalising, but headed home a corner soon afterwards.

“I was angry, I was definitely angry,” Lovren said. “The lads asked me in the dressing room: ‘What did you want to do when you scored the goal?’ I said: ‘I wanted to jump into the crowd!’

“I said to myself I am working too hard to make a mistake like that and to lose the game. So I just kept on moving. I said I was angry and I wanted to score that goal.

“When you have a winning team, you have to show your character and move on quickly. I think we showed that.”

Liverpool are level on points with Premier League leaders Manchester City after a strong start, and Lovren said: “We are in the race. We need to keep on working hard.

“I think we have shown this year that we can play against the big teams. We are not scared. I think the biggest opponent for us is us.”