Zlatan Ibrahimovic is set to prolong his stay at Manchester United after Jose Mourinho said he will trigger a one-year extension at Old Trafford.

But is that the right move? Here’s the pros and cons of keeping the Swede for another season.

United are in desperate need of players who have the experience and confidence that comes from winning titles. Sir Alex Ferguson’s squad has almost been entirely dismantled, with just a handful of players remaining from his glory days, and too many of the incoming players have yet to enjoy success on any large scale.

Ibrahimovic’s trophy record is ridiculous and the self-assurance he clearly has as a result is something United could certainly do with clinging on to.

During this period of huge change, to keep a player of his experience who will help oversee and bring about this transition could be a huge boost for Mourinho and United.

While Mourinho might have quite selfish motivations behind keeping a player who is so clearly loyal to him in the squad, this may also benefit the team too. The last two managers lost the dressing room, so to have a player with such influence firmly in the camp of the boss may help bring stability.

From the perspective of the fans, having a player with a bit of personality is very much welcomed too. Having lost the likes of Patrice Evra, Rafael Da Silva and Rio Ferdinand in recent seasons, someone with Ibrahimovic’s character is needed with so few big personalities in the dressing room.

Fans have grown frustrated with Ibrahimovic over recent weeks as he’s become increasingly wasteful in front of goal. He’s missed too many easy chances which might have been overlooked if not for how long United have gone without a string of wins. Time and again they’ve utterly dominated a game but missed out on the three points because they couldn’t find the back of the net, and Ibrahimovic has been the most guilty of this.

That said, he is United’s highest goalscorer this season with eight goals to his name, at a rate of a goal virtually every other game.

All strikers go through barren periods and even a striker of Ibrahimovic’s calibre can be vulnerable to that. Still, in his last Premier League appearance he scored two goals, showing there’s life in the old dog yet.

Lack of options in transfer market for now

Maybe United have another Marcus Rashford hiding somewhere in the ranks or there’s an Anthony Martial waiting in the wings, but it’s hard to think of too many established strikers United could realistically sign next summer.

Ibrahimovic clearly isn’t a player for the long-term future but he looks after himself well and is not injury prone. He’s a great option to have, particularly when Wayne Rooney presumably leaves next summer, even if he plays in fewer games next season than this. 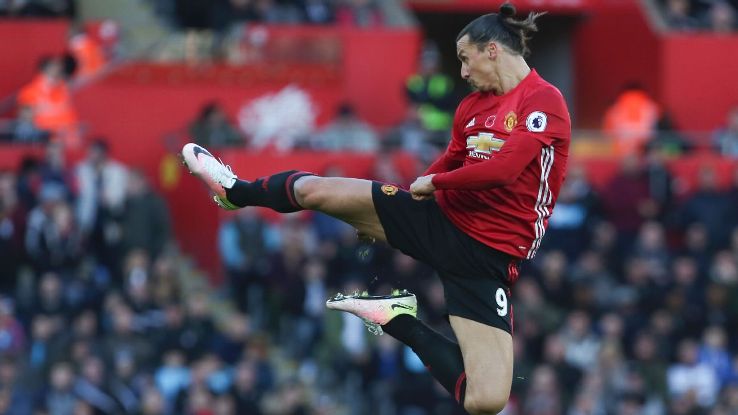 United need to move on and get younger blood

Ibrahimovic will be a few months shy of his 37th birthday by the end of his second year at the club. Paul Scholes played until he was 38 and Ryan Giggs until he was 40, so it’s not unheard of, even if it is unusual.

That said, surely the focus should be on developing the strikers and potential leaders the club already has, rather than flogging Ibra. With so much of the season still to go, it’s hard to draw a conclusion on how much the striker still has to offer, but for a club that has prided itself on giving youth a chance, it’s understandable they’ll be criticism of keeping Ibrahimovic.

What does this mean for Martial and Rashford?

Martial and Rashford are clearly the future attacking line of this club but for every minute Ibrahimovic plays up front, that’s time that is taken away from the young strikers playing in their preferred role.

Rashford has repeatedly spoken about how much he’s been learning from Zlatan, which is great, but does he really need two seasons of being mentored? When you consider he’s hit the ground running since making his debut, while he could still do with advice, he surely doesn’t need someone occupying his place in the team for two years to become a better player.

Only Paul Pogba is earning more money than Ibrahimovic. He probably brings in a fair bit of money to the club, but it’s hard to argue that a 35-year-old is worth the salary the Swede reportedly earns.

Is he United’s second best player? Probably not. Ibra’s wage could be better spent on a number of younger and equally competent players, which would provide more long-term gains than the Swede can band-aid over in the short-term.